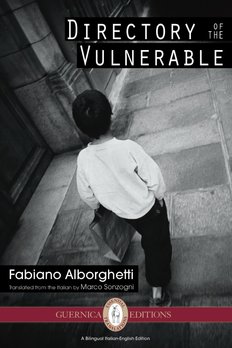 Directory of the Vulnerable is unusual in terms of style and content. With allusions to Dante and Pound, Alborghetti tells a story in 43 cantos. The almost hypnotic rhythm of these understated yet pressing texts lulls the reader into following an apparently uneventful account of ordinary lives and events. But at the heart of this exploration lies an unexpected and tragic incident. By showing the reactions of a credible cross-section of contemporary society, Alborghetti seeks not universality but to stand in the shoes of his subjects. Thus Directory of the Vulnerable is just that: a book about vulnerable human beings whose feelings and experiences are watched and recorded. What makes the book particularly interesting – and challenging to translate – is Alborghetti’s use of rhythm: meters and cadences that contribute to conveying the modus operandi of the people in this story
Marco Sonzogni, Samgha

Fabiano Alborghetti represent almost an anomaly, if not a challenge, in the world of contemporary Italian poetry. The anomaly consists largely in the poet’s adoption of a voice (or voices) other than his own, in the process divesting himself of his poetic persona to invest in the cultural and linguistic expropriations (and reappropriations) that such borrowed voices represent, whether they belong to the tattered margins or the dead center of society. Making such adoptive voices redemptive is a high-risk investment, and it is more so for a poet than for a prose writer.
Graziano Krätli, rain taxi
​
‘Directory of the Vulnerable’ , with a painful lucidity Alborghetti tries to comprehend and, yet again, he chooses direct observation and personal exploration, not so much of the protagonists of the drama, who are unavailable (or describable only in the distorting mirrors of journalists’ disinformation) but of the place which by way of allegory, contains and channels the tragedy. the author follows the customers, and families in particular;  he spies on their choices, movements, records fragments of their dialogues, their likely dreams, their inevitable catastrophes: he does this within the concrete reality of the shop, and the streets of the it y or the suburb, and also within the virtual reality of television and internet sites, via the cruel creation of spectacle that in recent decades has foraged hysterically in the sorrows.
Carmen Belmonte, Artists' Television Access​